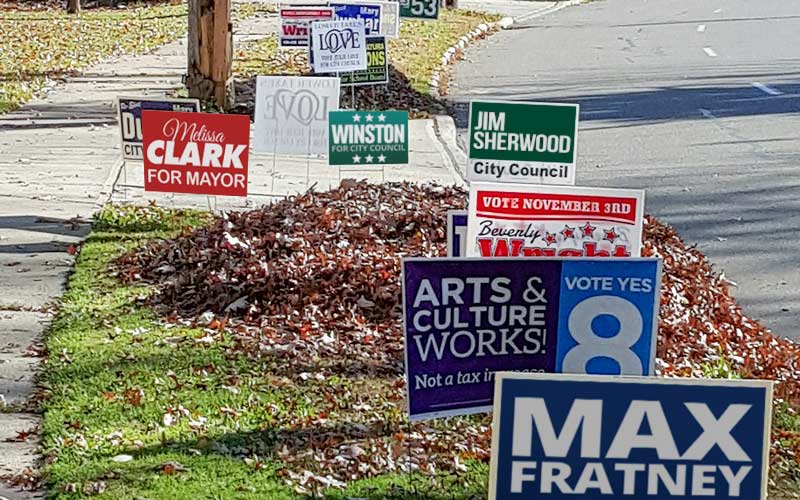 Getting lost in a seas of signs?  There’s no better way to get the word out about your campaign than radio advertising.  With radio, you can use the power of the human voice, your voice, to tell your story and persuade people to vote for you.  With radio, your message is “front and center”, not hidden in the weeds on the side of the road along with all the other campaign signs.  And radio is far more effective than passive media like newspapers and billboards.  Plus, Deltaplex Media is the only radio company in the Deltaplex who can help augment your radio campaign with an effective digital campaign.

Q: What is “equal time” and how do I get some?
A: If a candidate appears on-air at a station, equal time must be provided to all opponents. A good example of equal time was when Ronald Reagan was running for president and stations avoided showing any Ronald Reagan movies during the campaign season so as to avoid having to provide “equal time” to his opponents. Note: This does not apply to candidate appearances in bona fide news broadcasts. News broadcasts are not subject to “equal time.”

Q: What is the “lowest unit rate”?
A: All broadcast stations are required to sell advertising to all candidates at the same rate afforded a station’s best advertising clients. For example, a client who broadcasts a substantial amount of advertising and has an annual contract with the station may be paying a highly-discounted rate. This same rate must be offered to all candidates, regardless of the amount of advertising purchased by the candidate. Note: Any such highly-discounted rate may be for specific time classification (i.e. 5am-1am or 24 hours) and may be subject to preemption by other clients. Use care when purchasing ads at the “lowest unit rate.”

Q: Why do the rates change 60-days before an election?
A: The “lowest unit rate”, outlined above, applies 45-days prior to any primary election and 60-days prior to any general election. Outside of this time frame, stations are free to charge any rate they want for political ads, provided all candidates are treated the same.

Q: Why must I prepay for political ads?
A: If given credit, candidates who lose an election might not pay for their advertising. As such, broadcast stations typically require pre-payment for all political ads. We are also required to treat all candidates the same, so we can’t require some candidates to prepay and extend credit to others.

Q: Can I use ads longer than 60 seconds?
A: On some stations, yes. On others, no. It depends of the programming format of the station.

Q: What happens if I need to put an ad on after your deadline?
A: All stations have a deadline for advertising, political or otherwise. Commercial schedules for each station must be prepared in advance and loaded into the on-air computer. It is not always possible to get ads on at the last minute, which is why we encourage all candidates to plan as far in advance as possible.

Q: Can I find out how much my competitor is spending?
A: Yes. All broadcast stations are required to include copies of all political advertising contracts in the station’s “Public File.” Although a fast-changing election cycle sometimes makes it impossible to maintain such information in an up-to-date manner in the actual file itself, such information is available upon request.

Q: Where can I find out more?
A: Contact the Station Manager for more information.

There are plenty of reasons to not advertise. Here are some... Read More.
Previous Next